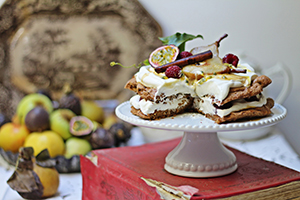 Draw two 15 cm diameter circles on a sheet of parchment paper and line an oven tray. Turn on the oven at 170ºc. Place the hazelnuts on another tray and place them in the oven to toast for a few minutes. Remove when they start to release their aroma and become toasted. Rub them with a cloth to loosen the film that surrounds them and grind them in a food processor. Reserve. In a very clean bowl pour the egg whites and salt. Using an electric mixer, beat at medium speed until frothy. Pour the sugar, one spoon at a time. Beat until you have a meringue with firm spikes.

Sift the hazelnut and wrap carefully. Divide the meringue by the two circles drawn on the parchment paper and bake for 30 minutes. Do not open the oven door during cooking or for an hour after the time has elapsed. In a saucepan, pour the water, port wine, cinnamon stick, vanilla open in half in the longitudinal direction, sugar and peeled pears. Cover and cook for 10 minutes. Remove the pears to cool and then cut them in half.

Beat the cream, add the sugar and cream cheese with the mixer in motion. Beat until fluffy. On a serving plate, place the first layer of meringue. Fill with half the cream. Spread the raspberries on top. Add the other layer of meringue and the remaining cream. Decorate with pears, raspberries and passion fruit.