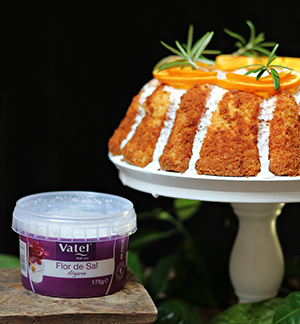 ** gives a touch of extra flavour in addition to allowing the egg whites to become firmer.

Turn on the oven at 175ºc. In an electric mixer, beat the egg yolks with the sugar until you get a whitish and fluffy mass. Add the orange zest and with the mixer moving, add the oil and orange juice.

Finally add the flour with the yeast, beating slowly to mix well.

Add the egg whites to the batter, carefully wrapping with a spoon.

Pour the dough into an ungreased pan and bake for 35-40 minutes.

Allow the cake to cool and unmould only after it is cold.

* i used a 250 ml cup.
** gives a touch of extra flavour in addition to allowing the whites to become firmer.

You should not open the oven until the time is up and you should avoid air flow until the cake is cold.